Campaigns on Engati, offer rich capabilities to design and build automated marketing campaigns to nurture your leads as well as handle a number of re-engagement use-cases.

A good way to understand campaigns is to think of it as similar to email drip campaign but with messaging for the chatbots. With increased flexibility around user segment targeting based on subscriptions as well as greater control over timing of successive messages for a specific user, campaigns is a significant step up on the Broadcast capabilities. This makes use of campaigns a perfect setup for optimising conversions via chatbots.

Campaign Management as a capability is available to Engati customers under Business Plan or higher.

Also, Campaigns can be managed from the Broadcast -> Campaigns menu option

Campaigns can be managed from the Broadcast -> Campaigns menu option.

In this workflow, you can see a list of all your setup campaigns as well as create one via the Create Campaign option.

Each campaign entry displayed here also shows the number of subscribers for each campaign as well as the messages sent as part of this campaign. You also have the option to edit/rename or delete a campaign from here

Once a campaign has been created, comes the part of adding steps. On clicking on the created campaign, you go to the campaign editor where you can manage each step/message of a campaign.

– Type: You can set up whether this step just sends a message or triggers a path and based on that set the appropriate message or the path to be triggered.

– Schedule: Then, the important option for the schedule – either the step can be triggered immediately following the previous step or after the set delay. The delay can be configured in terms of hours or minutes from the previous step

– You also have the option to control the delivery of these campaign messages on specific days – for example, you may not want to send messages on a weekend or otherwise.

Note: For the first step, the delay would be counted from the subscription time of the user to the campaign 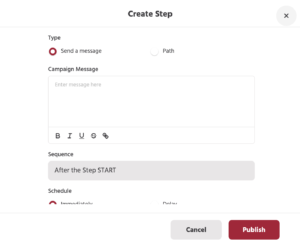 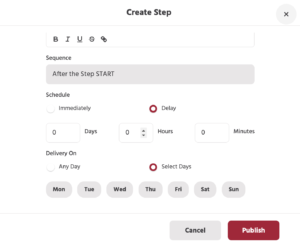 To aid with campaign subscriptions, the below conversation flow nodes are available – 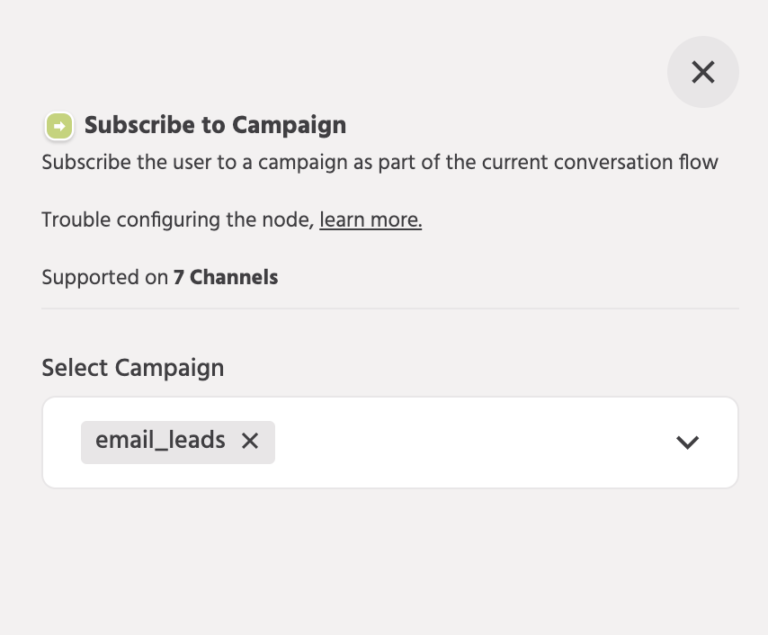 You can download the campaign subscribers as a CSV file. This would include data around the user (id, name, email, number as available) as well as other information like channel, subscription timestamp, etc.

Once a campaign is live, you also get to track how many messages were sent, delivered and read by your chatbot users. Note that delivery and read receipts tracking is a channel-dependent feature and might be inconsistent if there are multiple channels configured including some that don’t provide this data

As part of the Campaigns, users will be able to download the subscriber list by clicking on the subscriber count as highlighted in the image. The downloaded file will be available as a csv and will have the following information,

Updated 08 Aug 2022
Did this page help you?
Yes
No
UP NEXT
Analytics for Broadcast and Campaign
Docs powered by archbee