Engati provides a number of capabilities to assist you in building and managing your bots in multiple languages as well as just for non-English languages. These capabilities span across the various key components of the platform, namely FAQs and Intents which drive the NLP behaviour as well as the paths or the conversational flows.

Some of the key aspects of these capabilities are –

To understand the various aspects of these capabilities, we will create a simple chatbot that will welcome a user and let them explore the chatbot in their choice of language. For this, we will use two languages English and Arabic where English is the default language and Arabic is the secondary language.

Multilingual capability is present in our Professional and above plans.

2.2 Enabling Localization for your Chatbot

The first step to enable this feature, go to configure section present on the left-hand side, select languages and click on Enable.

Once this feature is enabled, properties files to manage the user-facing messages in the paths are generated for all the paths of the bot as well as FAQs are set up to support this functionality. 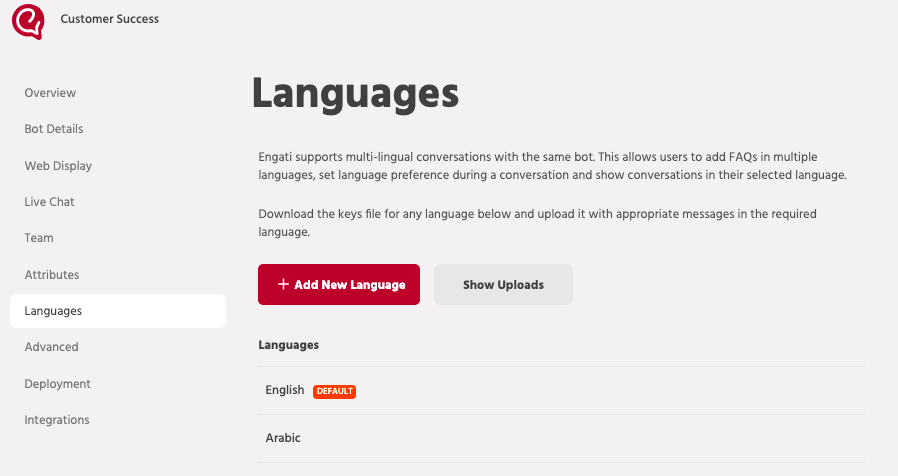 After the setup is completed, you can see the screen where the languages are available. Also, the strings for the various paths and settings of the bots are managed in this section.

Add the other languages which you want to support in the bot using the Add New button.

All Messages from the Conversation Flow Modeler or various Bot Configurations, are identified & referred to as Keys.

The keys and corresponding values for all messages can be downloaded as this properties file. This helps in easy management of the messages as well as getting them translated and updated since all the messages are in one place. The file contains all the user-facing messages from all the paths which are set up in the bot at that point. Whenever a path is added, the keys are also updated to include the new ones. This file also contains the messages corresponding to various settings that can be localized.

The keys/messages in the file are sectioned by the path in which those messages are present and then grouped by nodes. Comments are added in the file for each section to help you navigate the file easily. It is recommended to manage the strings after you have completed the bot flow design and all the paths are set up. This would lead to less frequent updating of the strings.

Once the file is downloaded, you can include the translated messages in the file here corresponding to each key/line in this file. You can use the default language file as a reference as well to help you get the context. Once this has been done Upload the key file into the new language from the same section. Please ensure that no messages/strings are missed in the properties files.

In the earlier section, we saw how to set up the language feature as well as manage the messages for the paths and settings by using the keys in the properties file. Now we will focus on the FAQs and Intents.

As highlighted earlier, FAQs can be associated with a language. Hence, you can have multiple sets of FAQs, each corresponding to the languages you are supporting.

In the following steps, we are going to learn how to add FAQs for the bot which supports two languages. 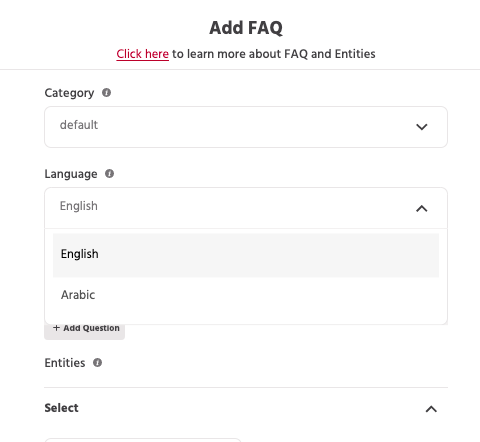 When a user asks a query, it will look up the FAQs stored in the user’s selected language (which is set via the ‘Select Language node’, explained later). It will also additionally look up the FAQs that are associated with the bot’s default locale (if they are different).

Note: In case the bot supports only 2 languages, the NLP engine would look through both the languages irrespective of the user’s selected language or the bot’s default language.

After the translated files are set up for the paths and the FAQs are added in the respective languages, we will now learn how the user can change the language or how to determine and set the user’s language.

The Select Language node is provided to facilitate the setting of a language in the path. 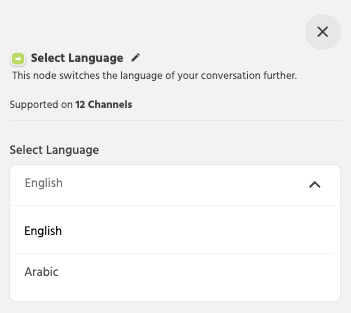 Define a flow and use the node that allows the user to switch to their desired language.

Once this node is encountered, all the nodes/paths after this node would be displayed in a particular language which is selected here. Also, the NLP engine would consider it as the set language for the user which it would use to determine the response.

Alternative Method for setting the language

Other than the Select language node, there are other ways in which the language can be set for a user. It can be set from the website chat widget script by setting the user.language with the appropriate ISO 639-1 code for the language. A use-case where this would come in handy is when the website is aware of the user’s language preference and that can be passed on to the bot’s context as well.

The same attribute can be set via the Set Attributes node, the Script node as well as the JSON API node similar to setting any other standard attribute. The behaviour in each of these would be the same as using the Select Language node and would switch the language of the bot with the relevant messages being displayed as per the newly set language.

This default language can be changed by toggling the radio button for a particular language. There are two modes that are supported for changing the default language with different behaviours for each.

The other mode doesn’t do any additional processing of the FAQs or strings and keeps them as is.

Additional things to know regarding Localization

Make it super easy for the bot user to get to the options for changing languages. If you are very sure of their configurations, you can use the Select Language node for doing it as well as control it via the attributes.

If you are not sure of their preferences, present the options for selecting language upfront. You should also have FAQs set up to enable changing/switching languages in all the languages you are supporting, especially the default language since that would be looked up to always.

Make sure to add the messages for changing the language in all the languages you are supporting. This fact goes for any greeting or introductory messages as well which are meant to be generic/language-agnostic. Also, at least the most common keywords/actions, FAQs should be ideally supported for all the languages for a seamless experience for everyone.

Make sure to review all the strings/messages for all the language you have added to check if anything is missing and if everything is correct, including the settings and default values. The user experience would be severely affected if the end-user sees keys instead of messages from the bot

Special characters like *, “”,^.$,# throw an error for some languages. Adding them to the key will lead to an error while localizing a bot. Also while creating attributes n needs to add ‘{{‘ in the key, again it will give erroneous output.

If the language you are supporting isn’t on the list of supported languages, you can select the closest one similar to the language and add your FAQs and path messages. You can choose to leave it as English as well and the default matching rules engine would be applicable in that case.

Updated 04 Jul 2022
Did this page help you?
Yes
No
UP NEXT
Enabling voice bots
Docs powered by archbee

Updated 04 Jul 2022
Did this page help you?
Yes
No
UP NEXT
Enabling voice bots
Docs powered by archbee