The script node allows you to insert custom Javascript code which will get executed during the path execution. This will allow you to build complex flows with logical operations, arithmetic computations, data processing/transformation, etc. All this without the need of having a separate backend infrastructure to run the code. Execution happens on the platform itself.

As an output of the Script Node, you can send a text message, carousel or a message with options prompt. Also, you can branch the path flow execution based on the output of the script execution. Setting attributes is another helpful thing you can do with the script node so that the execution output can be used in subsequent flows.

The process function is a system-provided function that is used to convey a special meaning to the platform for processing the output of the script node. It is a mandatory element of the script node and would typically be called at the end of the script execution. It takes a single JSON object as a parameter that can be set up as per the intended behaviour.

A script can do any of the following options – Sending a text message, Sending a message with options set, setting attributes in the system for a user, or changing the path flow execution by triggering a path.

NOTE: While copying the script from this Document the quotation ” gets replaced by a left quotation mark “ due to which you face an issue ” Invalid or unexpected token”, kindly replace the “ with ” and it should work fine.

The object has to be set up in the following manner encapsulated within the data object. the type field is set to text and the text field will contain the actual text.

To load options in the Send Message (with Options), set a field with “dropdown”: true – all the options will load in a dropdown format for the website chatbot and upon selecting the variables will be set with the required value

In the below example, ‘option’ as a value will be set for attribute {{option-selected}} when the user selects ‘Option A’

Note: Above list of the dynamic dropdown will only work for website chatbots, for other channels it will be shown as buttons 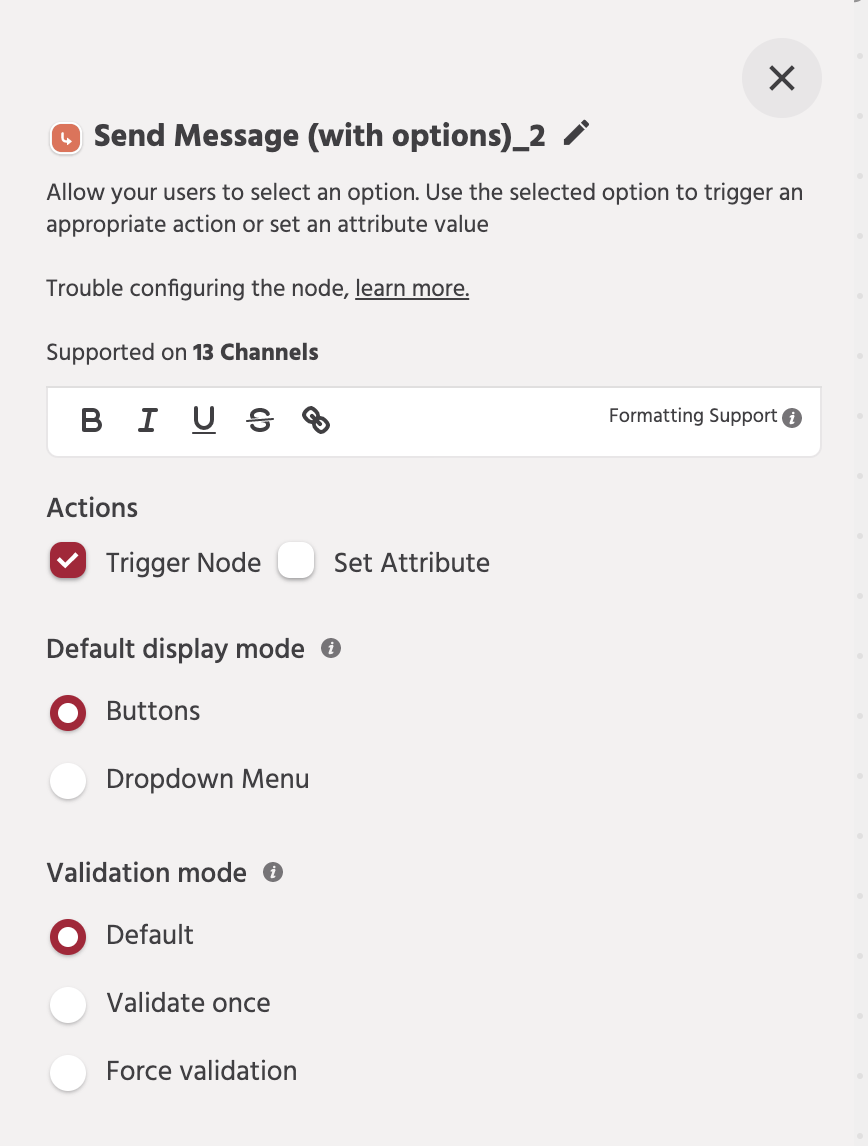 In the above image, following options are available that can be used as required

5.2.4 Switch between Interactive buttons and a Numerical list for WhatsApp (360dialog)

By default, all dynamic options loaded through Script Node and JSON API Node will be displayed as Interactive Buttons for 360dialog users. Use the below script and toggle “is_interactive_list” as true or false

The below script will show options as a numerical list on WhatsApp for 360dialog users, 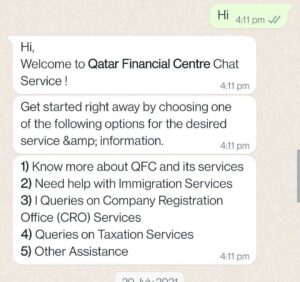 The below script will show options as an interactive button on Whatsapp for 360dialog users, 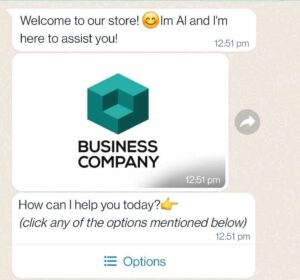 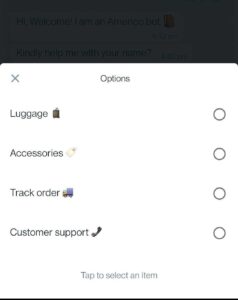 1.Following is the script for rendering dynamic Send Message (with options) post a JSON API call. In the sample below {{models}} attribute is an array type attribute created from a JSON API Nodes response. This can be used for displaying options without any break point, but for better interface to be used in situations where options are limited

2. Following is the script for rendering dynamic Send Message (with options) post a JSON API call. In the sample below {{models}} attribute is an array type attribute created from a JSON API Nodes response. This can be used for displaying options with a break point after 9 options it will show 10th option as 'see more'

For the carousel, the type would be carousel and the individual cards would be part of the templates array. Each card object can have multiple elements like title, subtitle, image_url and a set of buttons associated with it.

Each button object again can be of various types – web_url, postback or phone_number. Based on the type, the payload value would be set up. Each button would also have a mandatory title.

You can set up an attribute by using the attributes field which takes in an array of attribute objects. Each attribute object is a very simple object with name and value fields. This field can be used in conjunction with the other sections as well.

If you want to trigger a path dynamically using your script execution output, you can use the path_to_follow field under the data object and give the path key which you want to trigger. This field can be used in conjunction with the other sections as well.

1.Select the path to which you want to redirect to

3. Copy the value beside the option Path Key into the script

1.Select the path to which you want to redirect to

3. Copy the value beside the option Path Key into the script

Script node can be used to perform arithmetic operations.

You can collect the data from the users via the “Request User data node” and use the attribute values in the script node.

The following are the sample scripts for Addition, Subtraction, Division, and Multiplication.

Since we are displaying a carousel with multiple cards, we have created multiple template objects and stored them in an array by the name templates.

This array is then used to display all the cards on the carousel.

Updated 30 Nov 2022
Did this page help you?
Yes
No
UP NEXT
Set User Attribute
Docs powered by archbee